Doomsday Preppers: Does This Gas Mask Make Me Look Fat? 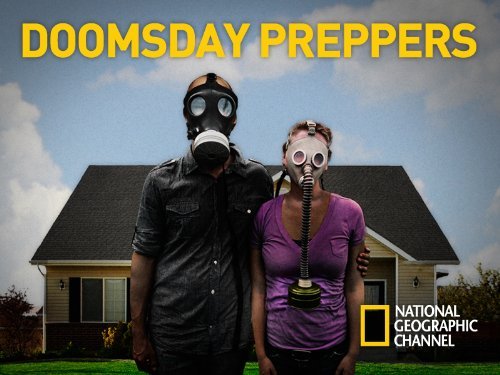 One of the less than 3 shows I watch quasi-regularly is Doomsday Preppers. There I said it! This show is in its second season, but I have only been watching since it premiered for the second season in November of 2012. I had heard about the show before and was interested, but never could find the time to watch it. When I saw the previews for the current year I jotted a reminder down on my trusty calendar and made plans to watch this season. Since the first episode I saw I have been trying to determine if this is a good thing for the Prepping community or a bad thing.

Let me start off with the parts of the show I like once again reminding you that I haven’t seen all of the episodes. For starters I love watching the various ways people are prepping and seeing how far along they are in their preps. In almost every case I am humbled by the amount of food or water people have stored up. It is motivation to really buy another case of freeze dried food or find a place to stick a 55 gallon water barrel in my house. (This would be much easier if my wife would not freak out if I took over one of the bedrooms). It is very interesting to see the security options that Preppers have implemented from spider holes to bunkers to hidden retreats in the woods. Again, this gives me motivation to make the same considerations in my own plan. In one show for instance the focus of two neighbors was hydroponic gardening and the show allowed them to demonstrate the systems they had set up to use the waste from tilapia fish to fertilize their plants. No matter what you think, that is pretty awesome!

What I don’t like or what makes me wince a little is how some of these Preppers are portrayed. Now in fairness to National Geographic, these are all (except in one case) adults who should have been more than aware of what they were getting into. People are all different and I have friends myself who are what you could nicely call Eclectic. These same people can come off as slightly odd or even deranged at times but they would give you the shirt off their back if you needed it.

One episode I saw had a kid who was 13ish and I didn’t feel like the show should have aired about him. He was a nice kid with a great idea but how far can you go if you have to swipe a can at a time from Mom’s grocery bag to build your stockpile? There was a pathetic initiation scene where this boy who had started to form his own Prepping group went about “Initiating” someone who wanted to join. One of the tasks the new recruit was asked to complete was starting a fire. Simple enough right? Well they had congregated in what looked like an abandoned building, started the fire and it quickly got out of hand. Normal kid stuff (I have done the same thing) but in light of this episode the impression was that Doomsday Preppers was saying or allowing him to show how feebly he was prepared. I don’t think this was fair to him and I could only imagine the grief he got at school after that episode aired.

Another show had a guy named John Adrain who apparently has his own business as an inventor. He also had some very impressive preps and even invented an under the bed safe and a vehicle console safe that could store an AR-15 and spare pistol. Not too shabby in my estimation!

I am watching John overlook his nice house with a great security system and then they go into how John’s security consultant (who the hell has a security consultant?) was going to stage an attack to see how John would cope. This is where it started going downhill for me.

I am not sure if this was at the security consultants coaching or National Geographic’s producers, but John started crawling around on the floor with his pistol hiding behind the kitchen island with a worried look on his face. He looked like he was getting ready to plant flowers not take out intruders.

One episode had two guys in a hunting blind and one of them fired his rifle (they were both shooting at a target) and apparently the one didn’t have his ear protection in and the noise was of course loud as crap! So the guy who moments before was Billy bob bad-ass was rolling on the ground and eventually threw up! This proved to be the straw that broke the camel’s back so his Prepping partner, who he had made elaborate plans with, had to go. His lamp was out and he was kicked off the island. Well not really, they made up after the nurses came and told him he was ok. Nurses are so great like that!

In a different episode a man had actually started to build a castle in the hills somewhere. This was a guy after my own heart and I was so excited to see what he had done and all of the work that had gone into building this super fortress. You quickly saw that not much more than the exterior walls and an underground bunker had been completed. Don’t get me wrong, that still kicks the snot out of what I have but I was a little deflated at that point.

Once the show started they devised a corny sub-plot where this man’s sons and daughters were going to compete for the keys to his castle so to speak. They didn’t know anything about this until he called them all up for a weekend at the fortress though. The winner being the one most capable of seeing his dream of the castle to completion would control the trust with all of his inheritance money. This was just sad and quickly makes you question what anyone of his kids say during the show. It’s like a bad version of what I assume the Jersey Shore (never saw one single show) would be like with everyone playing for the camera to show Pop how “down with the struggle” they all are.

Another problem I have is the use of each Prepper’s “Fear” to drive a statement at the end of each show about how likely we are to ever see anything like that. The narrator’s voice comes on the end and says words to the effect of “Experts agree Giant Martians have a less than .000000034 percent chance of landing in Topeka and eating anyone’s brains out”. OK, maybe that’s true but it shouldn’t negate Prepping or make what the individual Prepper is doing less valid. Maybe they don’t get eaten by Giant Martians, but they would be well prepared for just about any other natural crisis.

The last thing that I have mixed feelings about is the rating system they use to rate everyone. The first thing I noticed is that the scores are very similar from Prepper to Prepper but it could be that this is not an exact science. OK, I get that but maybe it’s a little too subjective. Someone with an underground missile silo should get a much higher score than someone who plans to bug out in rafts down a river. I’m just saying.

So taking all of that in, the good and the bad I still feel that overall this show is good for the Prepping Community at large and for the rest of the public as well. Wikipedia says that Doomsday Preppers is “the highest-rated show” in the history of the National Geographic Channel. I have to believe that this show doesn’t have a high following of people who are just laughing at John on his knees behind the kitchen island. I believe that the audience is people who are either actively prepping like me and want to learn from others or they are interested in Prepping and they are checking things out. I don’t believe that Doomsday Preppers is out to show all or even most Preppers as crazy. I think all of us would do something that others would consider silly or stupid if we were followed by a camera crew all day. I doubt I would come out of that any better than anyone who has been on this show.

I will keep watching Doomsday Preppers to learn how others are preparing and having the occasional laugh at how some people are acting. Just like I do whenever I am with family.